Three species of sea turtles typically nest on area beaches; leatherbacks, green turtles and loggerheads.  Although rare, species like the Kemp’s ridley have been documented on occasion.

Since March 1, the official start of nesting season, lone biologists have been heading out at first light on ATVs to comb the beach, equipped with GPS and their data sheets to look for crawls.  “Once we spot a crawl, we walk up the crawl to determine if it was a false crawl or if the sea turtle nested.  Nest locations are recorded with GPS, and physically marked with stakes and flagging tape.  Then we monitor that nest daily until hopefully hatchlings emerge, documenting and sharing information as part of a state-wide Florida Fish and Wildlife Conservation Commission (FWC) database for further analysis,” said Joey Pessolano, Biologist, EAI.

Biologists also document all non-nesting emergences (false crawls) using GPS and record any abandoned body pits or egg chambers, looking for obstructions like human-placed objects, escarpments, changes to the beach profile or other environmental factors that may have contributed.   After a prescribed waiting period and taking environmental factors into account, unsuccessful nests are also excavated to calculate overall reproductive success.  All of this data feeds into the FWC database for a comprehensive understanding of sea turtle nesting along Florida’s East and West Coasts

This is the second season of permit-required monitoring linked to the Sebastian Inlet District’s most recent beach nourishment project that placed 113,000 cubic yards of sand on that same stretch of beach between January and March 2019.  Denoted by FDEP R-monuments R-10 to R-17, the 1 ½ mile stretch of beach being monitored sits downdrift from Sebastian Inlet starting at McLarty Treasure Museum and continuing South to Ambersand beach access.  The monitoring includes a once a week escarpment survey inside the beach fill area, tracking trends and qualifying observed conditions per FDEP protocol.

“If you look at our project and monitoring schedules, the District in practice is conducting these important surveys annually, sharing data and collaborating with partners state-wide while meeting project permit requirements,” said Sebastian Inlet District Executive Director James Gray.  “The District is mandated by the Florida Beach and Shore Preservation Act to bypass sand that migrates into the inlet system to downdrift beaches, but we are also keenly aware of the importance of area beaches to sea turtle nesting.  We want to make sure our efforts don’t have any adverse impact and the Commission is unwavering in their commitment to preserving the many unique and diverse habitats surrounding Sebastian Inlet.”

The Sebastian Inlet sits between two segments of the Archie Carr National Wildlife Refuge, designated as protected habitat by Congress in 1989 and spanning 20.5 miles of beaches in southern Brevard and Indian River counties.  It has the highest nesting densities for loggerheads in the World, and is the most significant area for green sea turtle nesting in North America, representing 20-35% of all the loggerhead and green sea turtle nests in the United States.  It also serves as a minor nesting area for the leatherback sea turtle, which is one of the world's largest and rarest sea turtles. The long stretches of quiet, undisturbed sandy beaches, with little or no artificial light, are essential to the reproductive success and survival of the 15,000 to 30,000 sea turtle nests seen annually.

Leatherback nests can easily be identified by the large footprint of the nest and the amount of sand movement.  Typically they are the earliest nesters on area beaches, and total overall numbers are very low.  Leatherbacks lay on average 80-120 eggs per nest, and the incubation period is typically 60 to 70 days.  The depth of their egg chamber is 3 feet on average. “So with your arm in the sand all the way up to your shoulder, you’re just able to feel the nest,” said Pessolano.  “Leatherbacks have larger eggs than greens or loggerheads too, and they drop yolkless eggs called spacers mixed in with normal eggs to promote ideal oxygen and moisture levels.”

Loggerhead crawls are identified by the alternating gait in their flipper marks and this species consistently tops the list in number of nests along our coast.

Green sea turtles nests are identified in part by simultaneous flipper marks in their crawl from the ocean as opposed to loggerheads.  They often leave a tail poke in the sand, and dig a deeper body pit than loggerheads when nesting.  Green sea turtle nests typically incubate for 45 to 50 days and have higher nesting numbers per an identified 2-year cycle.  Far more likely than any other species to false crawl, it is extremely important that people follow recommended guidelines to ensure nesting success.  No lights or flashlights illuminating the beach or on the beach, do not approach if you encounter a nesting female, don’t leave holes in the sand and clean up after your beach visit taking everything with you, to name a few.

Biologists are also keeping a close eye on all kinds of environmental factors.  Temperature of the sand has an impact on incubation period and sex of the hatchlings.  Generally higher temperatures equate to less incubation time so nests from mid-summer may hatch in fewer days than nests from the beginning or end of the season.  If the sand is 86 degrees or hotter, it is more likely the baby sea turtles will be female.  If the sand is any cooler, it is likely that some of hatchlings might be male.

About the Sebastian Inlet District

The Sebastian Inlet District was created in 1919 as an independent special district by act of the Florida State Legislature, and chartered to maintain the navigational channel between the Atlantic Ocean and the Indian River.  The Sebastian Inlet District’s responsibilities include state mandated sand bypassing, erosion control, environmental protection and public safety.  The Sebastian Inlet supports a rich and diverse ecological environment that is unparalleled in North America.  The Inlet is vital not only to the ecological health of the Indian River Lagoon, but it is also an important economic engine for local communities in the region.  Known as the premier surfing, fishing, boating and recreational area on the east coast of Florida, the inlet is one of only five navigable channels that connect the Indian River lagoon to the Atlantic Ocean. 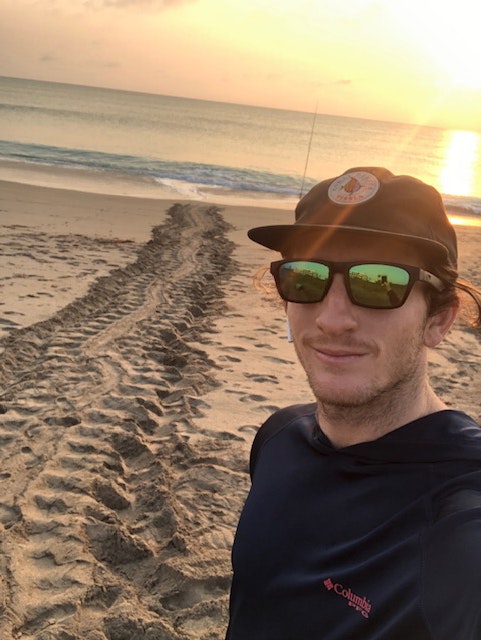 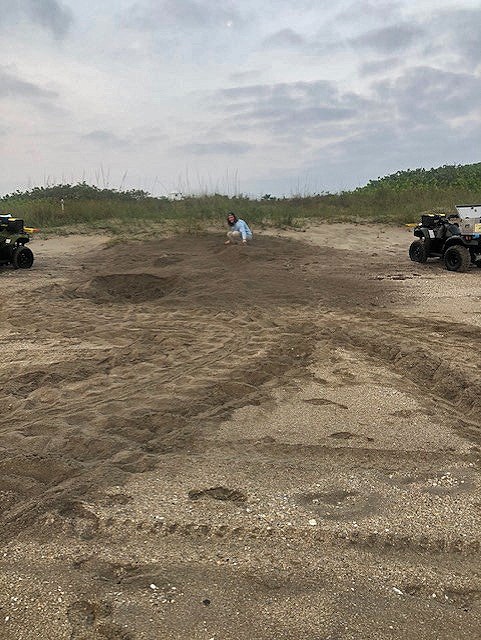 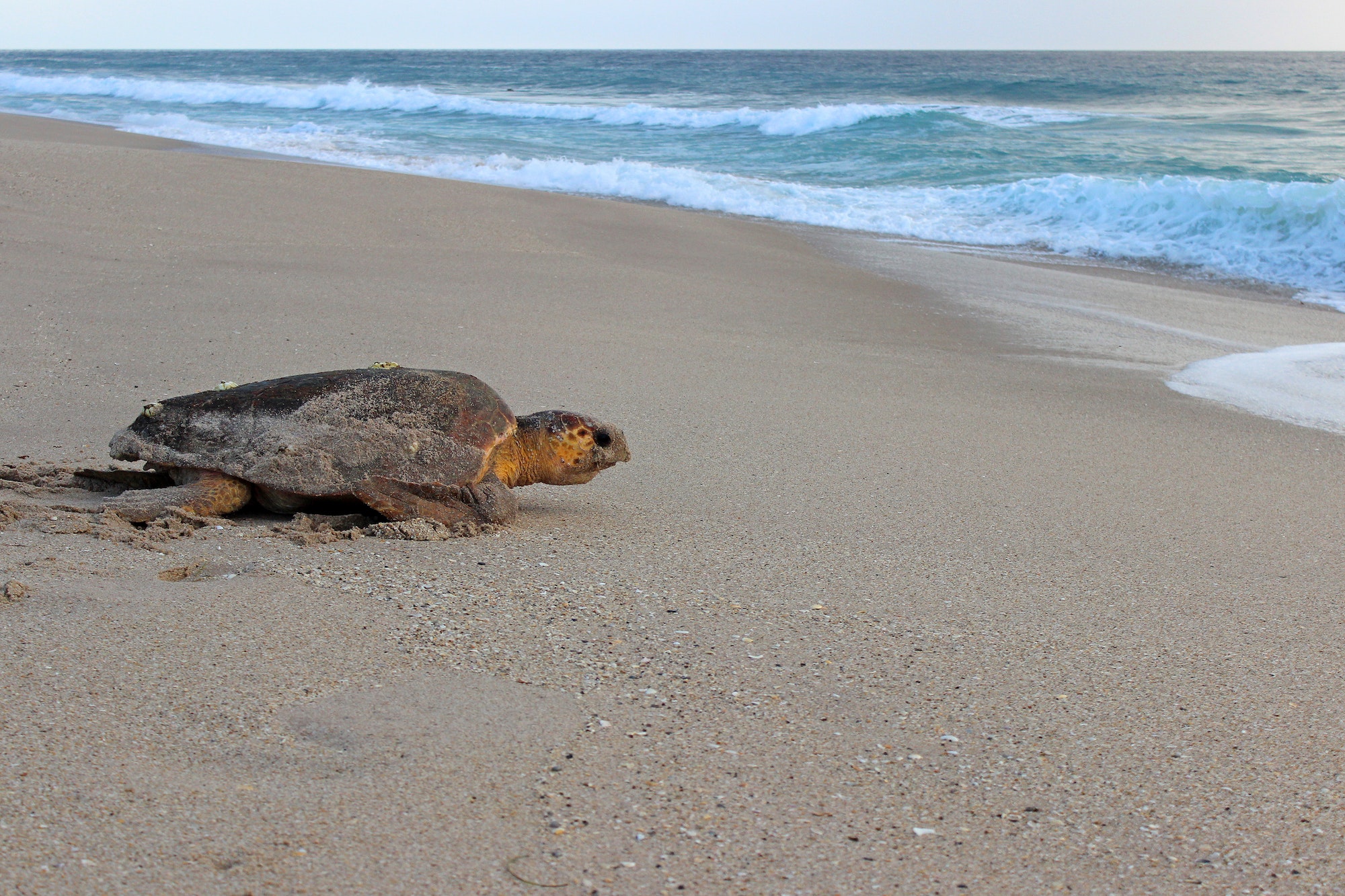 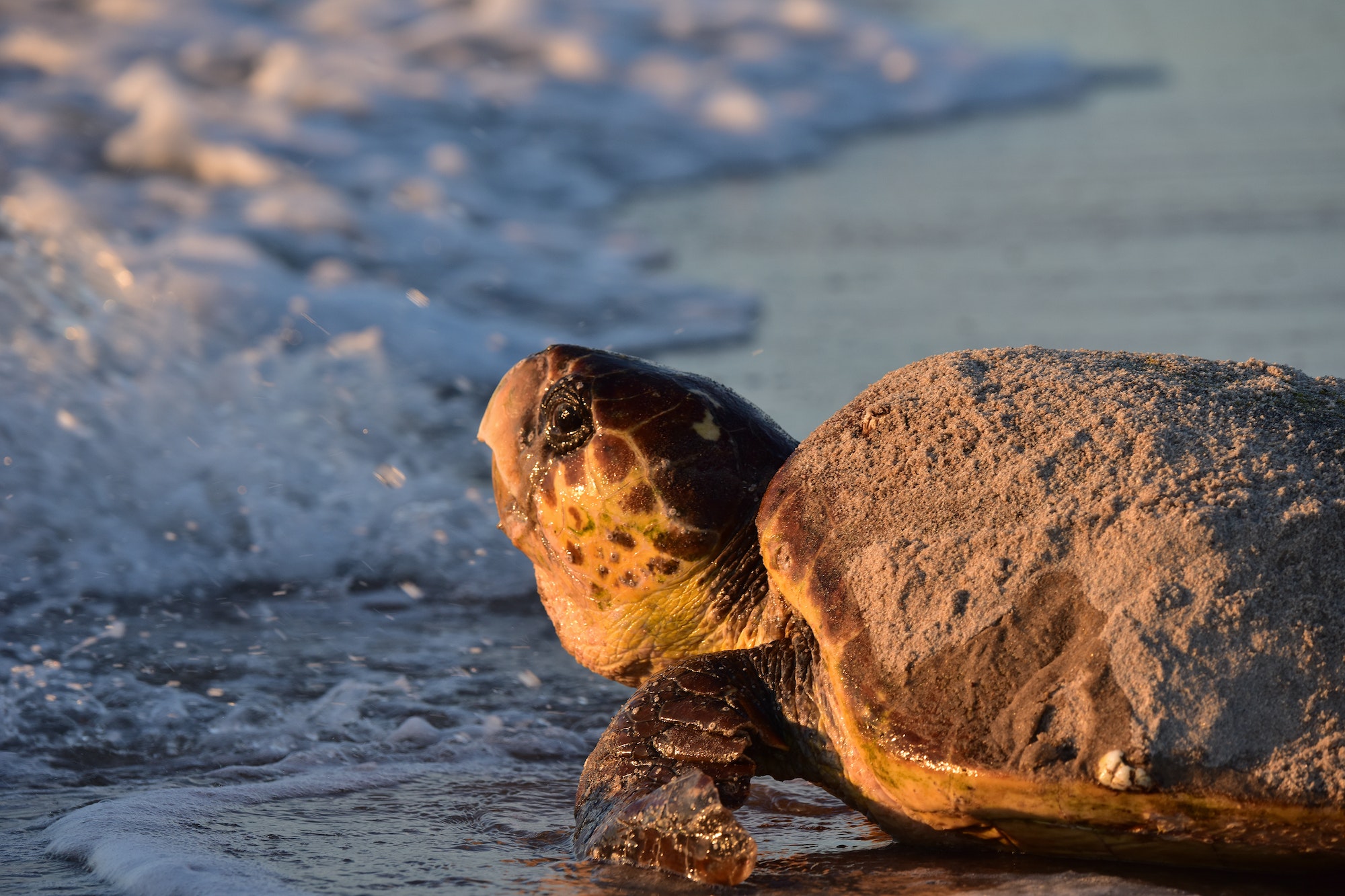 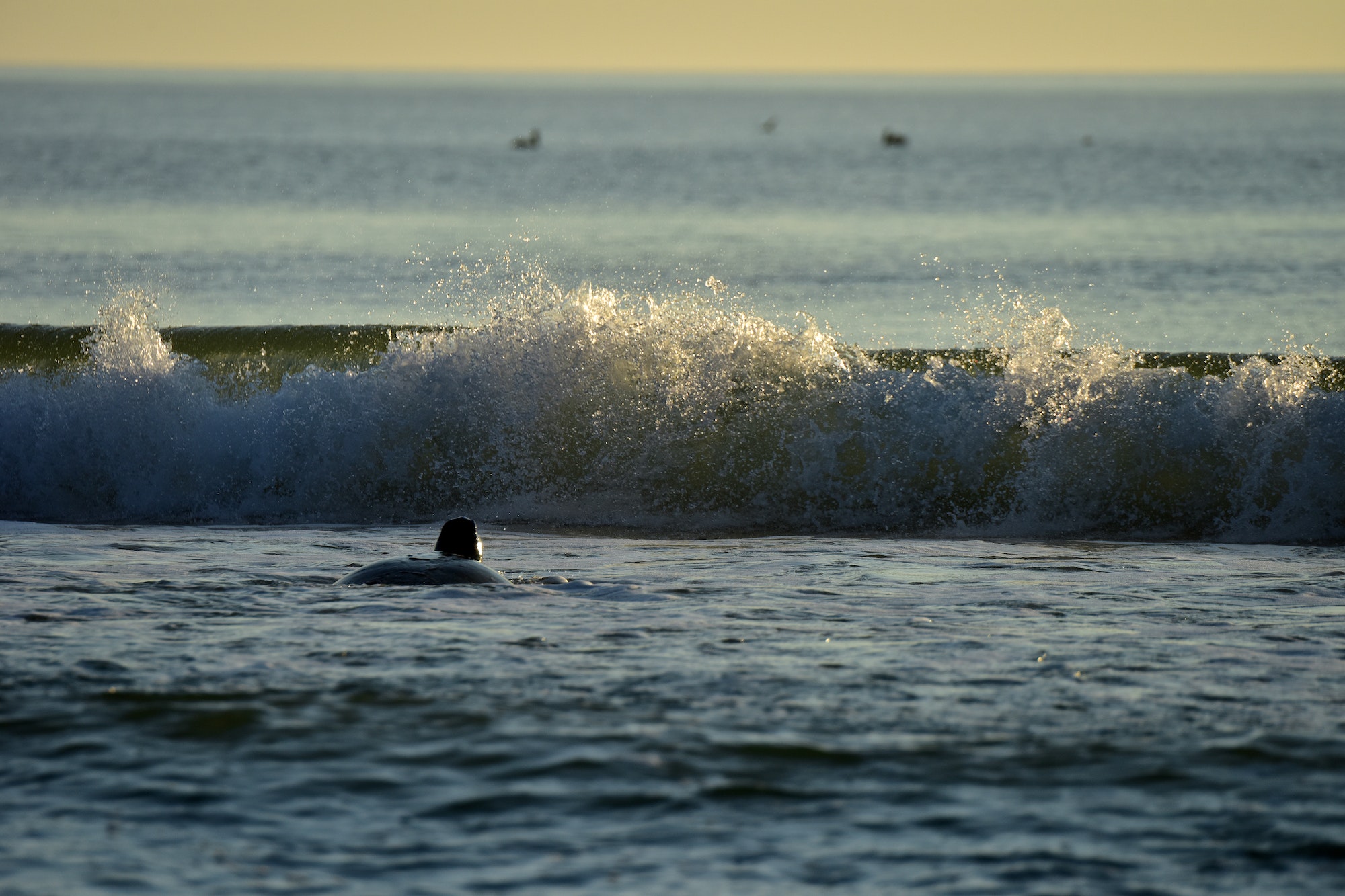 A green sea turtle in nearshore waters as she journeys back to the ocean. Photo courtesy of retired Sebastian Inlet State Park Ranger Edward Perry. 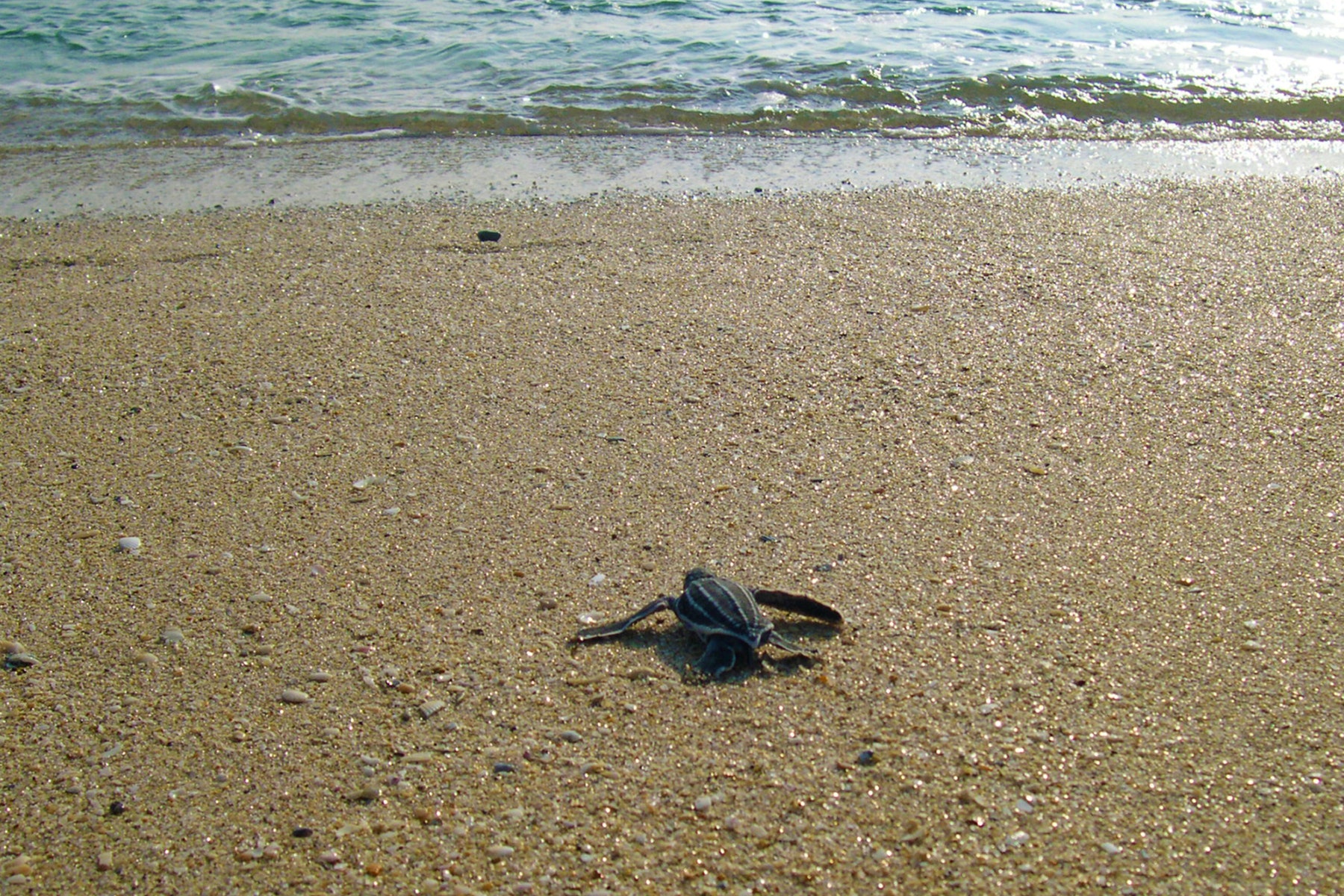 A rare leatherback hatchling makes its way to the ocean. Photo courtesy of Martin Smithson.