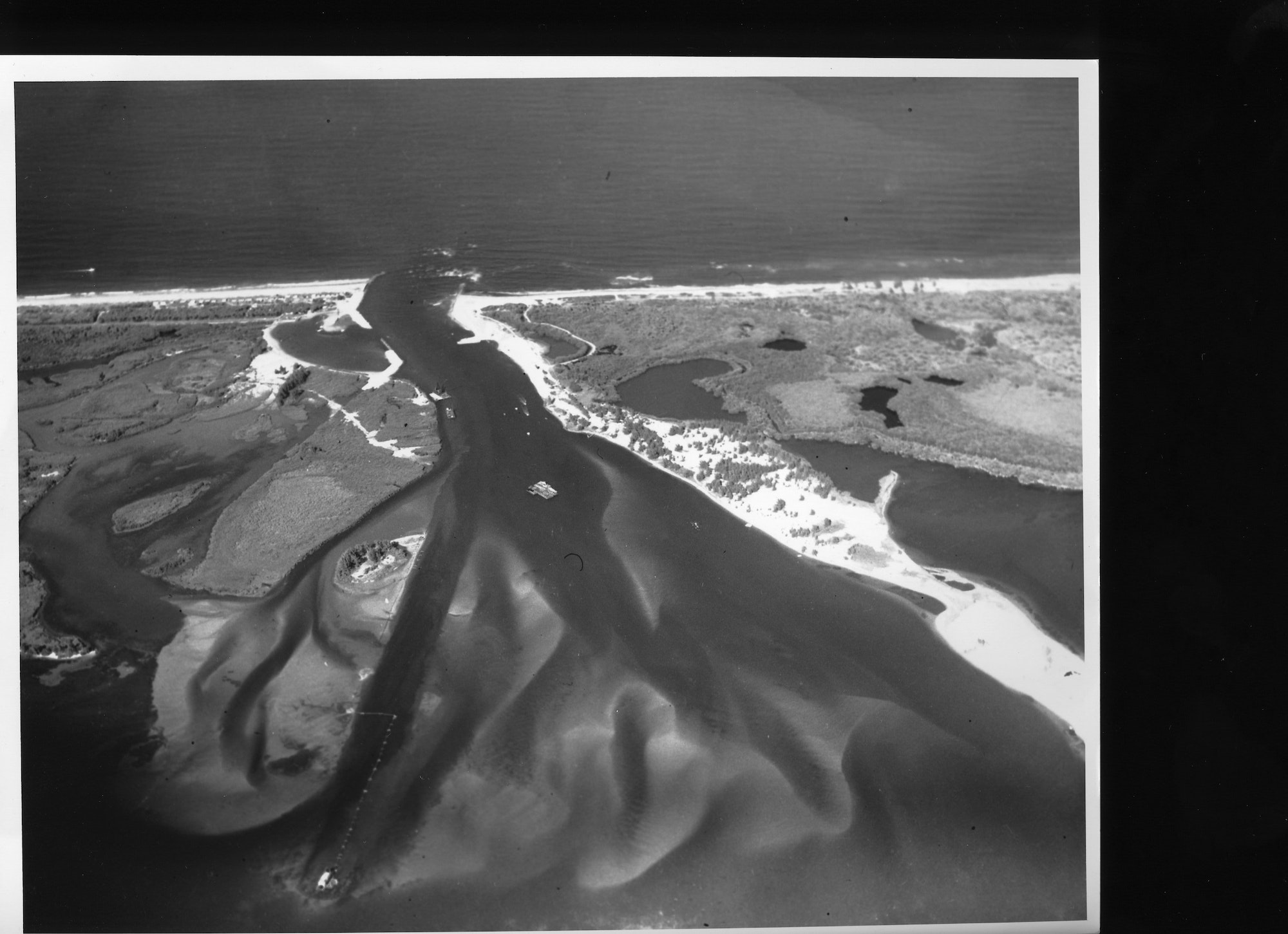 Sebastian Inlet as it looked prior to the construction of the bridge. 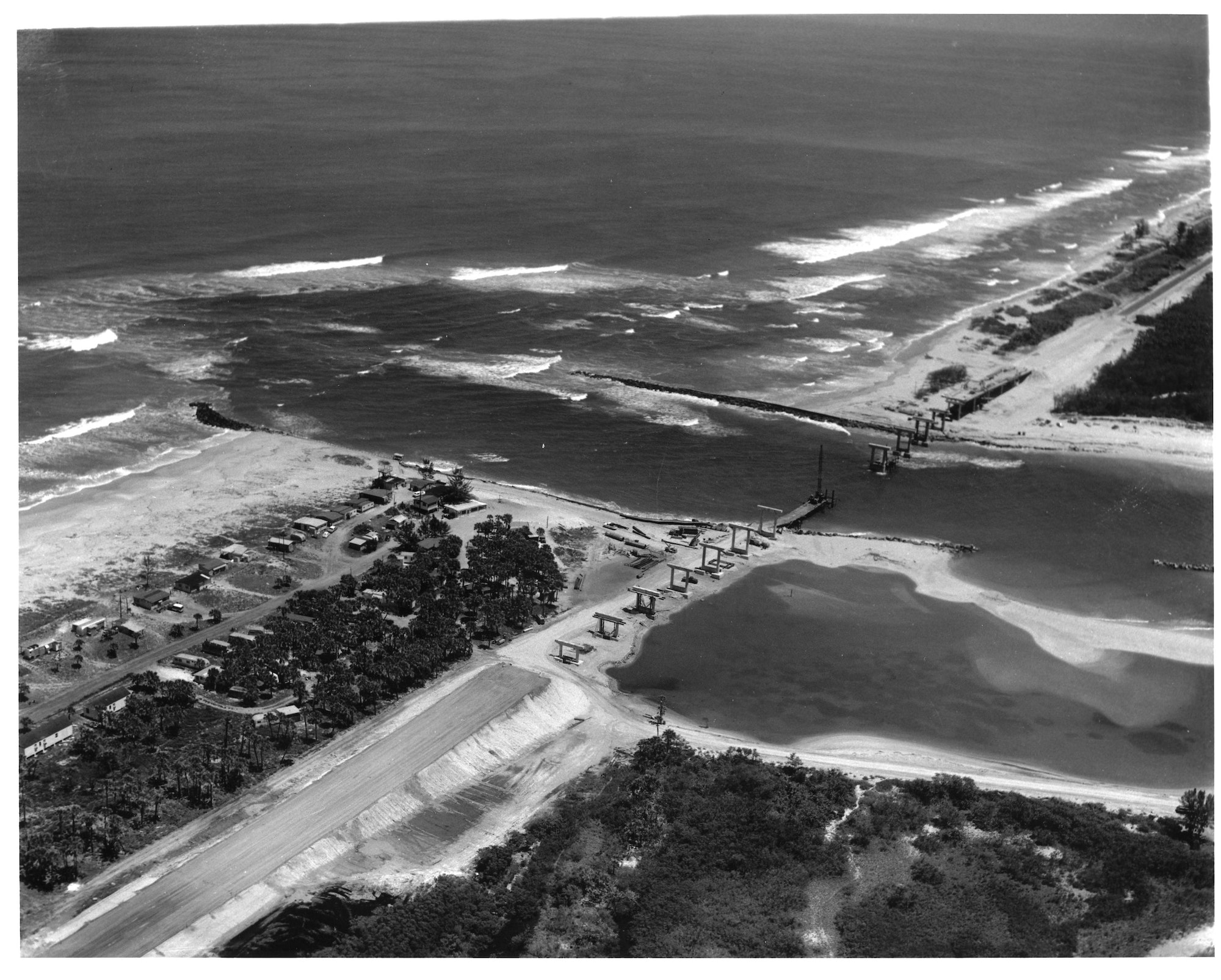 Bridge piers and pier caps are in place on the north side of Sebastian Inlet. 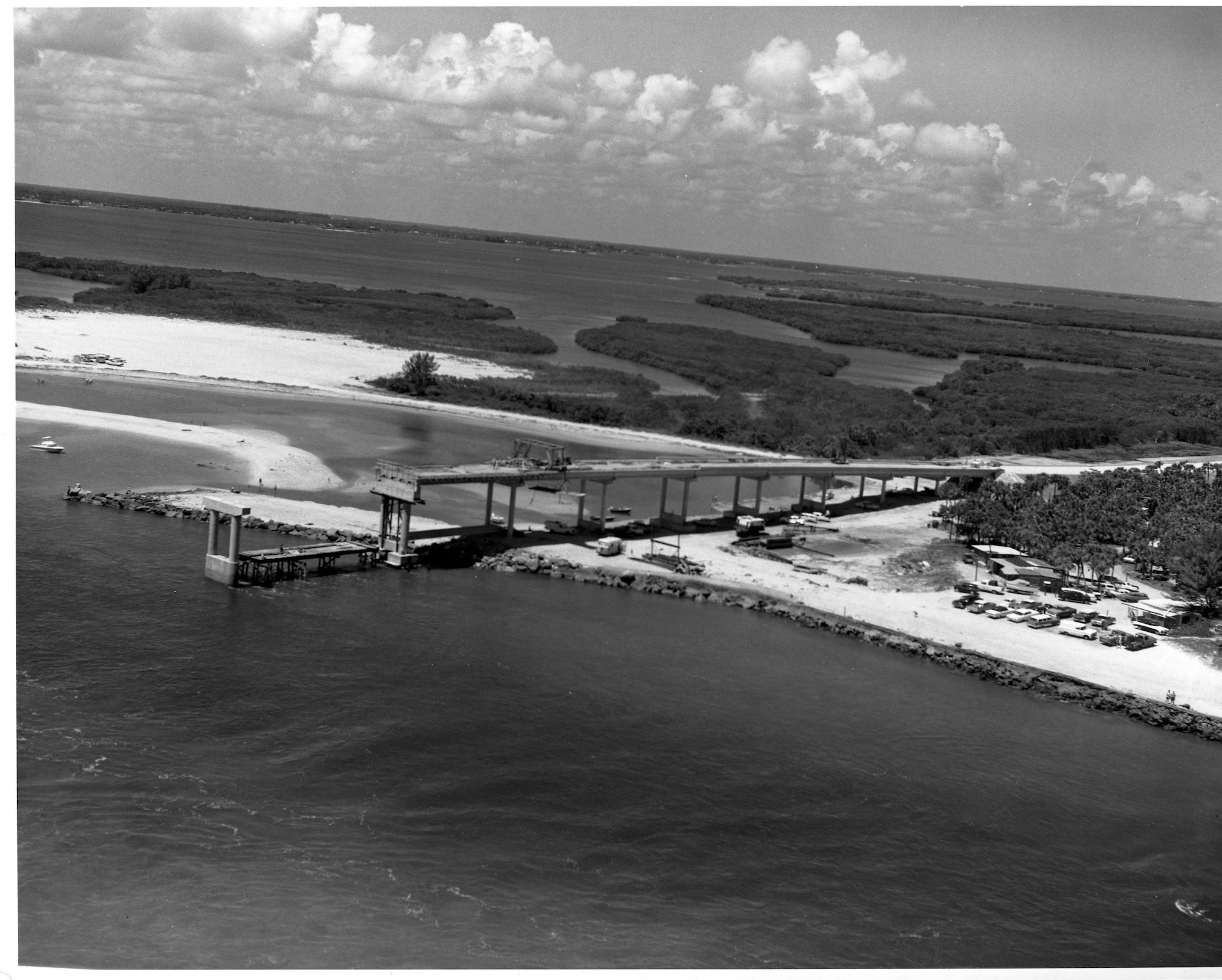 The partially completed span at Sebastian Inlet. The bridge was completed in 1964 and dedicated on Feb. 27, 1965. 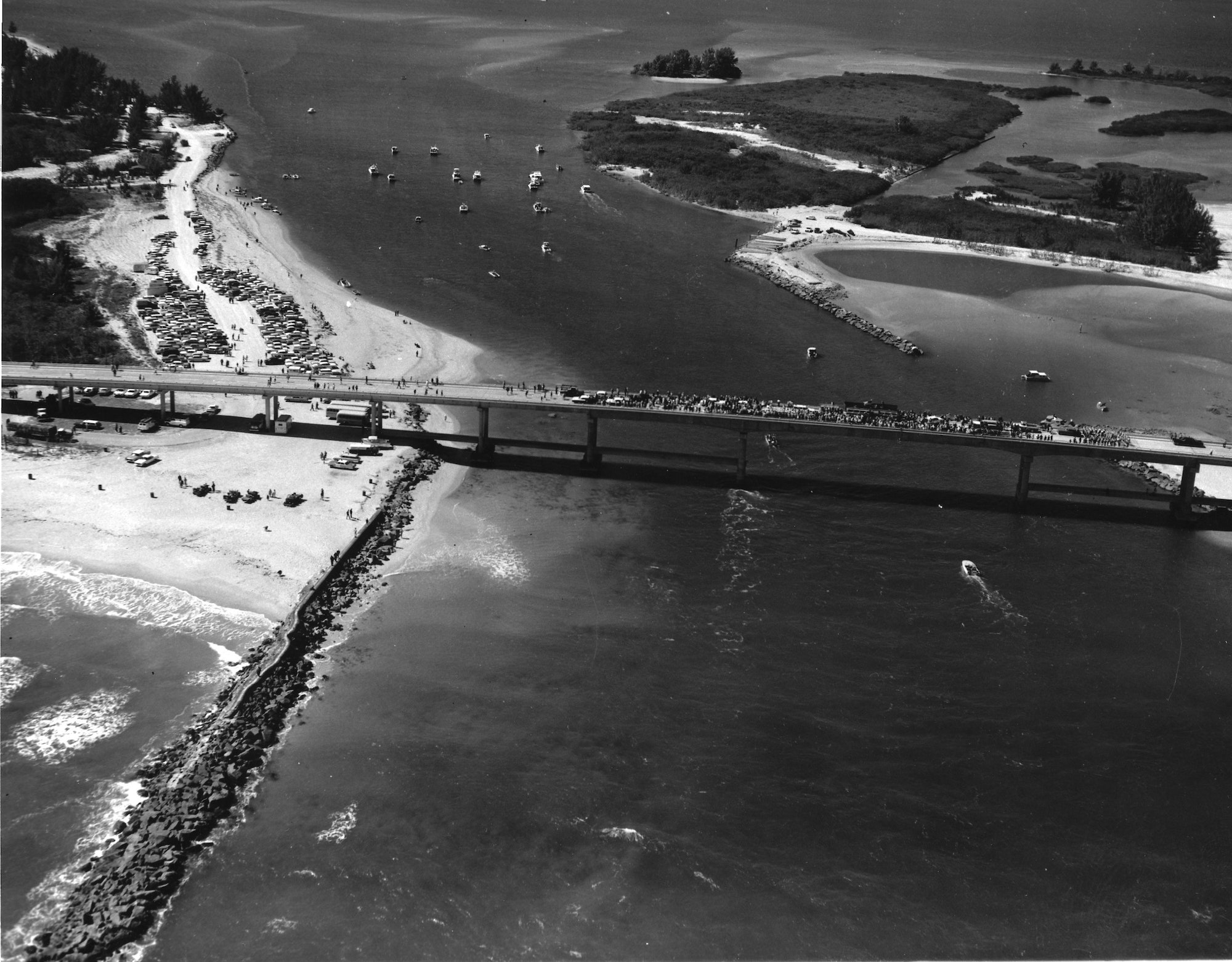 Elected officials and residents gather on February 27, 1965 to celebrate the dedication of the new bridge linking Brevard and Indian River counties at Sebastian Inlet. 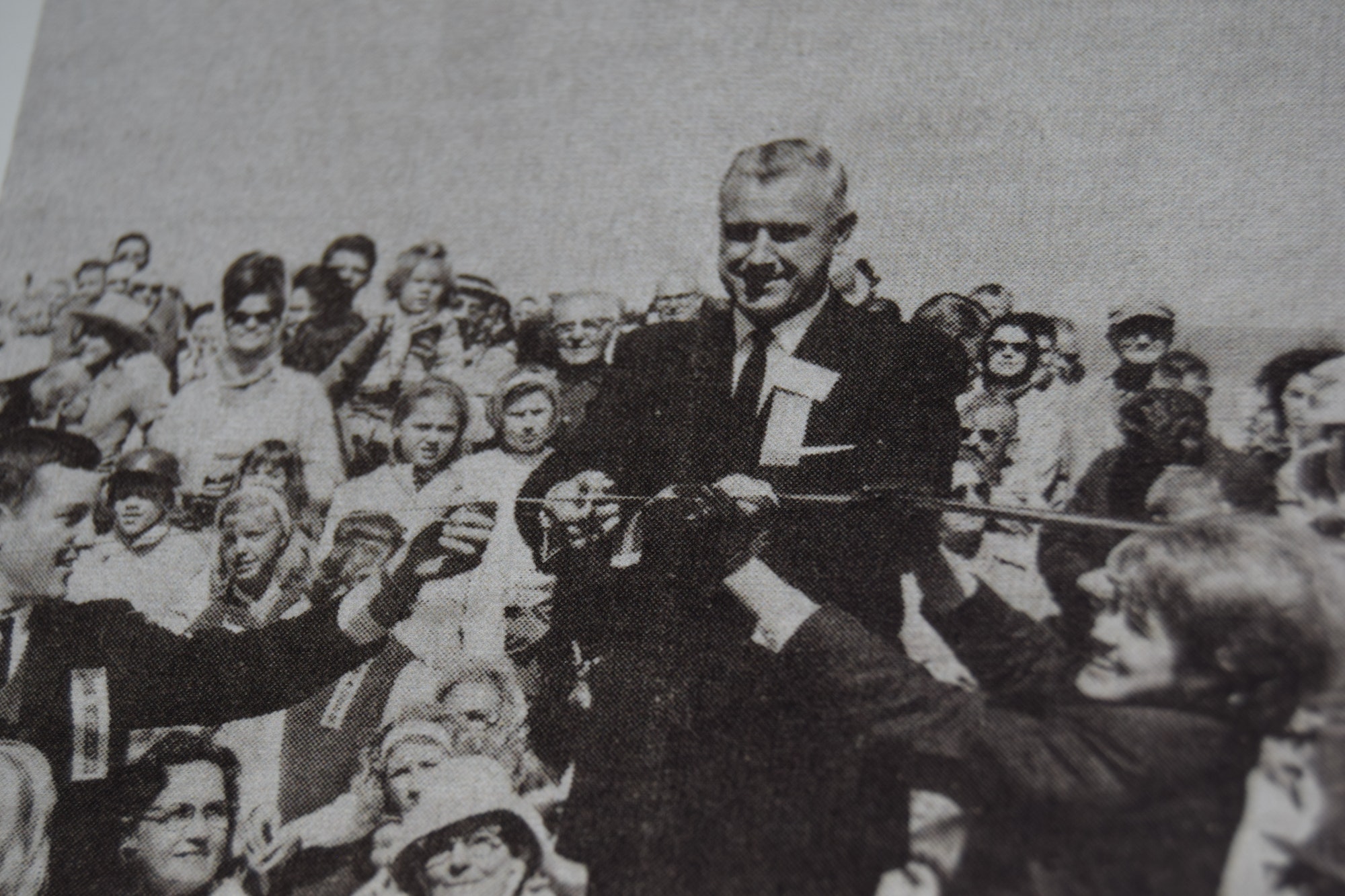 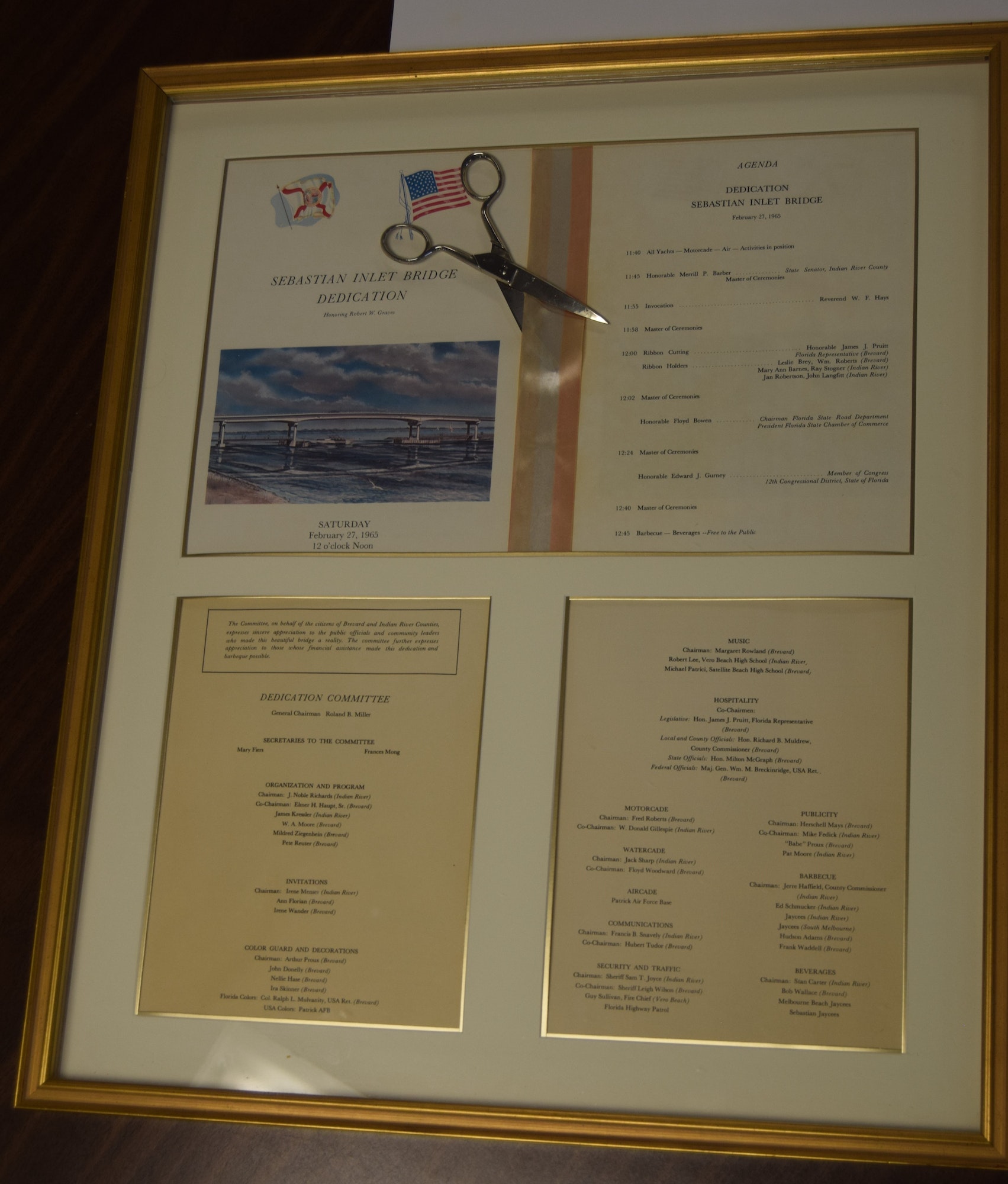 Artifacts from the 1965 bridge dedication, including the scissors State Rep. James Pruitt used to cut the ceremonial ribbon. 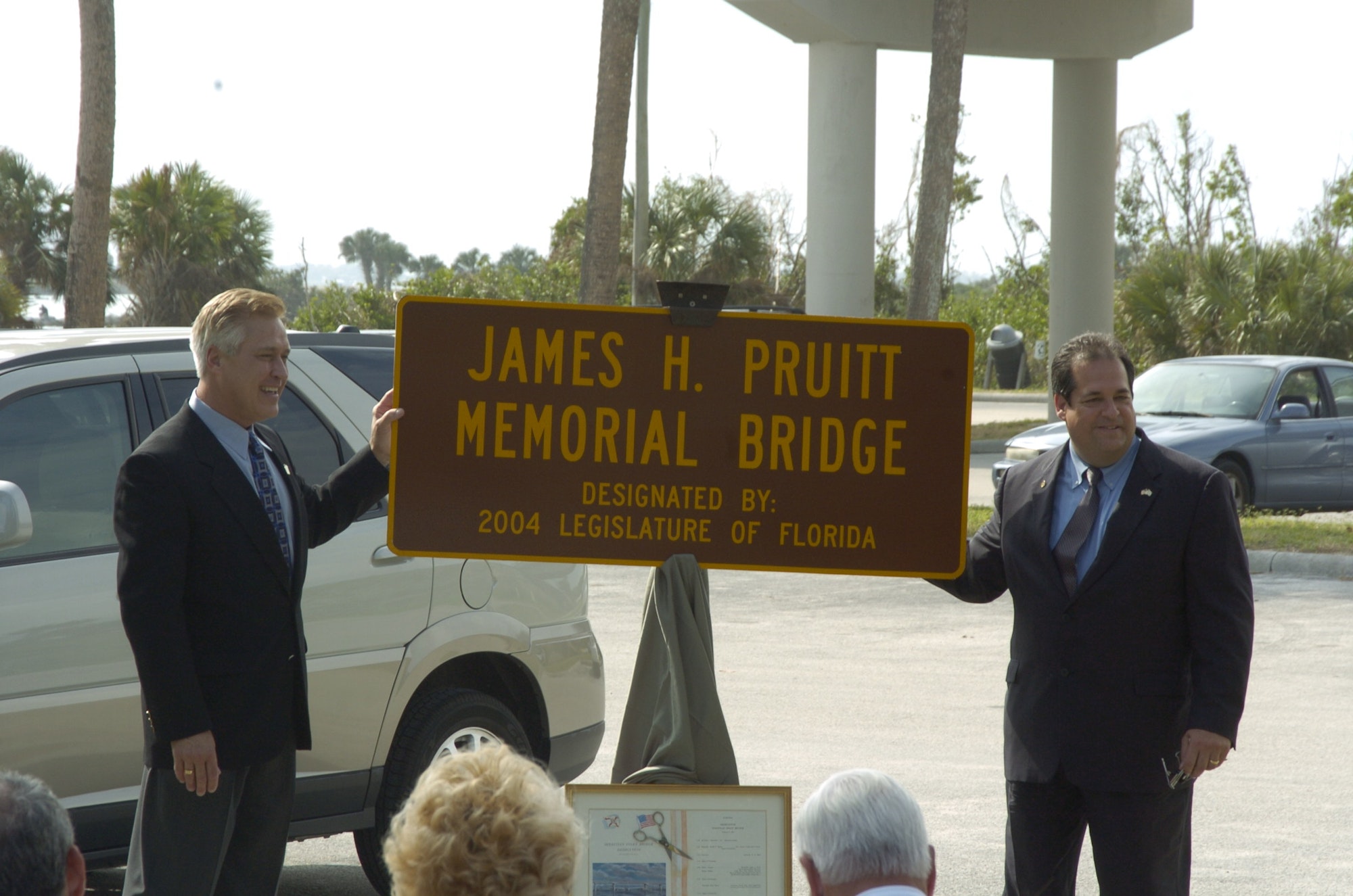 As a rule, ribbon-cuttings can be less than captivating for an audience, rarely drawing much of a crowd.

But there are exceptions.

Under sunny skies on Saturday, February 27, 1965, an estimated 8,000 people gathered to witness the dedication of the new Sebastian Inlet Bridge.

The excitement that day was palpable. For the first time in the history of Sebastian Inlet, a span crossed the manmade waterway, linking Indian River and Brevard Counties. The bridge would transform the inlet from a remote locale frequented by intrepid anglers and surfers to a premiere Florida destination that drew more than 819,000 visitors in 2021.

Residents of Indian River and Brevard counties packed the graceful, soaring span to celebrate as one. County and city leaders joined in the fanfare, as did several state and national officials.

Prior to the ribbon-cutting ceremony, U.S. Air Force fighter jets made three low passes in salute while a flotilla of pleasure boats plied the waters below. Officials arrived in motorcades from both sides of the bridge. It was easily the event of the year for everyone in the region.

At exactly noon, State Representative James H. Pruitt, who had been instrumental in shepherding the bridge into reality, cut a red, white, and blue ribbon held by high school students from both counties. Speeches were given, honored guests were recognized, and the public feasted on free barbecue and beverages. The Melbourne Times reported that  “traffic was restricted from the span for several hours longer to allow for completion of the several-hour-long dedication ceremony.”

“It was a fabulously beautiful day,” recalls Michael Pruitt, who says he was in seventh grade when his father cut the ribbon and made history. “There was much fanfare and excitement. U.S. Congressman Ed Gurney was there. Everyone was excited about the bridge, including me. I grew up surfing everywhere from Cape Canaveral to the inlet and now we could surf the south side simply by crossing over the new bridge.”

Michael Pruitt may have been excited about the new surfing opportunities that day, but nobody was more thrilled than his father, State Rep. James H. Pruitt. The influential legislator worked tirelessly to help assemble the pieces needed to make the bridge happen. He introduced a bill calling for the moving of the Brevard-Indian River County line north to the center of the inlet.

“My father was Chairman of the State Road and Bridge Appropriations Committee,” Michael Pruitt says. “He knew the routine, so he just had to get the players to talk. He got Indian River and Brevard together and they agreed to move the county line so the south half of the bridge was in Indian River. That way, Indian River was willing to provide their allocated monies. Brevard didn’t have the needed funds at the time. Indian River County was key to making the bridge happen because of the funding that was needed.”

Today, you can look at a map and see where the Brevard-Indian River county line jogs in a way that bisects the Indian River Lagoon at Sebastian Inlet, Michael Pruitt notes.

James Pruitt passed away in 2002, but his life of public service — fighting in the Pacific theatre during WWII, serving as a city council member and mayor in the city of Eau Gallie in the 50s, and as a Florida legislator from 1959 to 1967 — did not go unnoticed.

A few months after his father’s passing, Michael Pruitt received a call from then State Rep. Bob Allen, who told him, “I want to talk to you about something that will affect your family.”

In the wake of James Pruitt’s passing,  Allen had researched the legislator’s integral role in the development of the Sebastian bridge and proposed to sponsor a bill that would rededicate the span in his honor.

On November 18, 2004, friends and family members gathered at Sebastian Inlet State Park, where speeches were made and Rep. Allen presented a memorial plaque to Michael Pruitt. It was a fitting tribute to the public servant, business leader and father who helped bridge two counties when he cut a ribbon at this location nearly four decades earlier.

“Sebastian Inlet has been a passion of mine since before I could drive,” Michael Pruitt says. “ Now that I’m a fisherman, running through the bridge in my boat to go offshore…I can’t tell you how many times I’ve gone through the bridge where it just hasn’t given me the tingles. The event that changed the name of the bridge is something my family has held near and dear. We don’t take it for granted.”

As an avid boater whose family’s legacy is inextricably intertwined with Sebastian Inlet, Michael Pruitt said he’s glad that the Sebastian Inlet District continues to add to its own 103-year-long history of maintaining the navigational channel within the inlet.

Created as an independent special taxing district in 1919 by special act of the Florida State Legislature, the Sebastian Inlet District was chartered to maintain the navigational channel between the Atlantic Ocean and the Indian River.  The Sebastian Inlet District is responsible for bypassing sand that migrates into the inlet system to downdrift beaches per the Florida Beach & Shore Preservation Act, and conducts periodic dredging, channel maintenance, sand bypass and beach renourishment projects.

Michael Pruitt donated to the District historic digital images of the inlet, newspaper articles about the 1965 and 2004 ribbon-cutting ceremonies, and a framed collection of dedication documents – including the scissors and a swatch of ribbon used in the 1965 ceremony.

“Anything I can do for the Sebastian Inlet District, I am happy to do so,” he says.

In 2026, the Florida Department of Transportation is scheduled to begin construction of a taller, wider replacement bridge at Sebastian Inlet. The elements have taken their toll on the James H. Pruitt bridge but the graceful span will be remembered as a pivotal milestone in the history of Sebastian Inlet and the development of one of the most highly visited state parks in Florida.

·         “Catwalks” are constructed below the bridge and jetties extend along the inlet  to the Atlantic.

·         See the Florida Department of Transportation study to replace the bridge here.

·         The Sebastian Inlet District has maintained the inlet navigation channel beneath the bridge since 1919.